Congratulations to everyone at East Kent Hunt Pony Club! 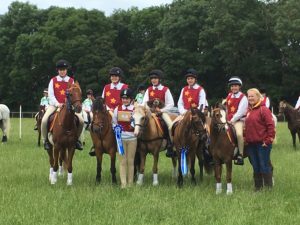 On Saturday 2nd July the East Kent Hunt Pony Club team travelled to Warwickshire to compete in the Pony Club Central zone qualifier for the ‪#‎HorseoftheYearShow‬. With 14 of the best teams in the region the team battled it out for the top spot and their golden ticket to Hoys. The team have trained tirelessly every week since Christmas for this one competition, and this true team spirit and determination showed in their performance on the day. They lead the competition from start to finish any mistakes corrected quickly and their support for one another was second to none, the result fully deserved.

The team will travel to Birmingham NEC for a week in October and will compete with 5 other teams from around the country for the Prince Phillip cup, this is a dream come true for all of the girls who have all been competing in mounted games since the age of 4.