We are open,click here for our COVID guidelines.

There were 8 teams in total taking part over 2 days.  On the Saturday, Nat swam at the Windsor Leisure Centre, took part in the shooting section in the NFU marquee at Windsor, scoring 1000 points (10 bulls’ eyes – a brilliant score!) and then had to run along the banks of the Thames.  At the end of the first day, the Southern Region team were lying in first place with 19 points. 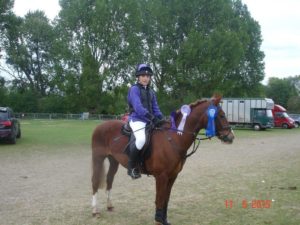 On Sunday, the competitors took part in a timed course of a combination of show jumps and rustic fences including a slip rail. The turnout of both horse and rider had to be of the highest standard.   Unfortunately penalties incurred by the team dropped them into 2nd place.

Based on individual scores, Nat won the shooting competition and came 6th overall.  The teams were then invited into the main arena to be introduced to the Queen and to watch the trophy being presented to the winning Pony Club Mounted Games team – a memorable day was had by all!

Milbourn Equine would like to congratulate Nat and Boycie on their achievement.