Artificial Insemination (A.I) is a technique used to transfer semen from a stallion into the uterus of a mare during the correct stage of her oestrus cycle. A.I has become very popular in stud medicine for the advantages that it offers compare to natural covering (though not allowed in racing thoroughbreds), but, as much as it’s exciting breeding from your own mare, it’s important to understand how it works and the pros and cons before deciding to take this route.

What are the advantages of A.I

What are the disadvantages of A.I

Management of the mare and timing of insemination will be determined by which semen is chosen (fresh, chilled or frozen) but it is also very important to check in which of the three ways the semen is preserved best and travels best for the specific stallion.

Fresh semen is usually used on studs and only lasts outside the horse for short periods of time. It always has the highest fertility but mares and stallions need to be at the same location for insemination. Also fresh semen is usually the least expensive method, because requires no processing and less frequent veterinary checks.

The semen gets refrigerated immediately after collection and transported in chiller packs either by post or manual collection, staying viable for 2-3 days. The conception rates are greater than for frozen semen. With chilled semen it’s important to find out which days of the week the stud collects from the stallion and how much notice you will have to give for them to collect and send the semen.

After collection the semen is separated and added to a preservative. It is then frozen and stored below freezing, usually in dry ice. The semen can then be transported great distances in liquid nitrogen container and last for many years as long as it is kept frozen. Once arriving at its destination it can be defrosted, re-awakening the sperm and inseminated into the mare. Compared to chilled semen, the freezing and handling process slightly reduces the viability of the sperm and conception rates, therefore requires mares to be inseminated immediately before or after ovulation. However advantages are that breeders can use stallions which are still competing and the semen can be sent well in advance of the mare being in oestrus, avoiding the last minute delivery of chilled semen, which may not arrive on time.

Prior to embarking on an A.I. program it is important the mare is examined to ensure that she is fit to breed and asses for factors that may reduce fertility. The pre-breeding check, best if  performed safely in stocks, consist of a physical examination to evaluate vulval conformation, a rectal examination to check the cervix for any abnormalities and ultrasound scan to look for uterine cysts and to see at what stage of the cycle the mare is. At this time we will also be able to take clitoral swabs and, if required by the stud, to do blood tests to check your mare is free of venereal disease. 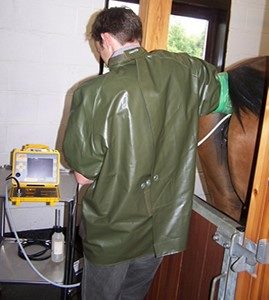 Mares cycle between February and October (cycles at the beginning and the end of the season can be very irregular) and have a 21-22 day cycle, with oestrus (the receptive period) lasting 3-6 days. To have a successful insemination resulting in pregnancy it’s important to place the semen in the uterus when the mare cycles regularly and at the correct stage of the cycle, so when she is in season and close to ovulation. Signs of oestrus in the mare include tail raising, opening and closing of the vulva (winking), frequent posturing and urination and some may, also, become anxious, aggressive, sensitive around their flanks and reluctant to work, though can be difficult to detect and irregularly shown. Ultrasound scans of the ovaries and uterus allows detection of the stage of the cycle and, measuring the size of follicle, we can predict when the mare is coming close to ovulation and inject her with drugs that induce it. The best time to inseminate varies with the type of semen used: for fresh and chilled, AI need to be done within 12-24 hours of ovulation whereas for frozen AI it needs to be done within 6 hours of ovulation, which means a greater number of scans are required both during day and night.

The most appropriate time to determine the pregnancy is between days 14 and 16 following ovulation through a transrectal ultrasound. At this time it’s very important to check for multiple pregnancies and, if necessary, deal with it before the embryo becomes attached to the lining of the uterus and makes it difficult to “squash” the twin.

A further scan around 28 days to check the normal development by identification of the foal’s heartbeat is advised. This also reduces the risk of missing detection of a twin pregnancy. If the mare is not pregnant then she should go back in season again allowing the program to be repeated, hopefully, with a more favourable outcome. 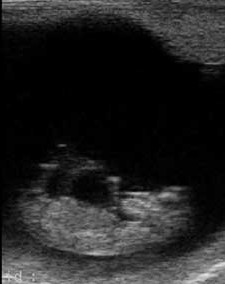