Sidebone is the laymans term for ‘ossification of the collateral cartilages of the foot’, i.e. the soft cartilages transform into much harder and less flexible bone.

The collateral cartilages (green shaded area) are found on the inside and outside aspects of the foot and can be felt just above the level of the coronary band, as flexible projections above the pedal bone (blue shaded area).

They function as shock absorbers for the foot as their elasticity allows the foot to deform during weight bearing, and then return to its previous shape. Sidebones develop more commonly in the front rather than the hind feet and are more frequently seen in the heavy (draft) breeds of horses than the lighter breeds and ponies.

What causes sidebones to develop?

Ossification tends to start at the junction between the cartilages and the pedal bone and is believed to be part of a horse's normal ageing processes. Mild sidebone formation is very often seen as an incidental finding in radiographs (X-rays) taken from horses. Excessive or uneven sidebone formation may result from abnormal loading/concussion of the cartilages, which may be predisposed by a number of things:-

Sidebones may be palpable above the coronet, when there is loss of normal pliability of the heel over the cartilage. The coronary band may bulge over the affected cartilage and the adjacent hoof wall may become more upright in conformation. Ossification of the cartilages is confirmed by radiographic examination to visualise the calcified cartilages.

Sidebones are very rarely a primary cause of lameness, although occasionally it can occur when the ossification becomes advanced and the growing sidebones press on adjacent sensitive hoof structures and deform the foot, or when large sidebones become fractured. Uneven sidebone can be an indicator of uneven weight bearing/foot imbalance.

So called 'fractured' sidebones, sometimes seen on X-ray, are often separate centres of ossification (bone formation), where bony transformation has occurred at an area away from the pedal bone and created 'islands' of bone within the collateral cartilage. This gives the impression of a fracture on the x-ray but is a normal variation and unlikely to be of clinical concern. Nerve blocks might be needed to determine if there is any pain caused by these apparent 'fractures'. 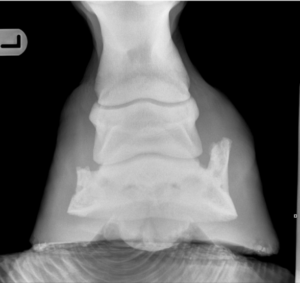 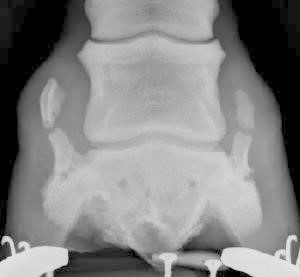 How can sidebones be treated?

Uncomplicated (normal) ossification of the sound horse’s collateral cartilages causes no clinical problems and requires no treatment. Where problems occur, ie lameness, it is most important to identify and treat the predisposing cause:-

Your horse’s feet should be regularly trimmed and shod to prevent imbalance, uneven weight bearing and to ameliorate concussive forces in the foot.

The prognosis for complete resolution and return to soundness is poor for the rare cases where sidebones are causing chronic (long term) lameness, especially those with extensive cartilage ossification and hoof deformity. If your horse is lame, all other causes should be excluded before sidebones are finally incriminated.